Gov. Ed Panlilio ready to run for President on 2010. 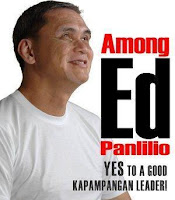 Have you recently heard the news about Gov. Ed Panlilio having the intentions in vying the seat in Malacañang? Panlilio said that he is open to this idea and said that he has been receiving support from Filipinos inside and outside the country. He also added that he will alot a period of discernment, silence and prayer and if he believes that there is a calling from the people and from God about him running for president, he might consider that as a basis of his decision.
I have a high regard for Gov. Panlilio (or Among Ed as they call him) for being himself when he chose to engage in politics and sacrifice his church vows. I have witnessed his episode from the time he came into politics until now that he's battling to a lot of detractors. Some liked the idea and others reacted violently.
Among Ed marked the political history when he was the first one to reveal an alleged bribe on national media when the Malacañang distributed half a million pesos after a Governors' meeting held in Malacañang.
I am not against the idea of Gov. Ed running for president. This is a neutral opinion on this issue and basically, I just want to know what others think on this concern. Do you think he can make a change if he’ll be president? He may have the courage to fight for the ideology that he believed in and for defending the principles of truth and integrity, but for how long? Some say he is too good to be true. Others say he is hiding behind a mask while others strongly support his ideals.
Coming from my point of view, I agree that anyone has the right to vie for any political title. What matters here is the pure intention of serving the country and uplifting the government’s morale, and not for personal or selfish intent. I hope, whoever sits in the Malacañang after the 2010 elections will be that one person Juan dela Cruz has longed for.