The 7th Brangelina Baby is Filipino 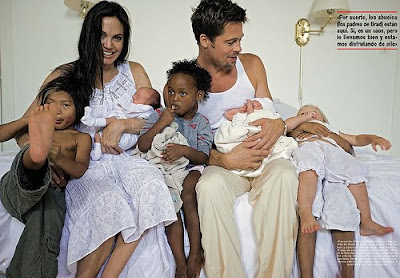 Brad and Angelina are determined to adopt an Asian baby. Another hot issue for Filipinos and for fans around the world from the famous Brad Pitt and Angelina Jolie. Because this time, a Filipino kid is a candidate after it has been reported that Brangelina took their vacation in the Philippines recently. The Hollywood couple is targeting to adopt their 7th youngster and as the news say, they want another Asian child. Originally, they planned to adopt a Burmese baby but the process was hindered due to some conflicts and issues with the authorities. Instead, the couple sees the Philippines as their search pool as sources say.
Currently, Mr. and Mrs. Smith have now 3 adopted kids. Maddox from Cambodia, Zahara from Ethiopia and Pax from Vietnam. And also the 3 legit: Shiloh and twins Knox and Viviene.
Hmm.. Could Juan dela Cruz be next?
Related post: