Imelda Marcos, tagged "Greediest of All Time" by Newsweek

Imelda Romualdez Marcos, ex- first lady of the late Philippine tyrant Ferdinand Marcos was tagged by Newsweek magazine as one of the 11 Greediest People of All Time worldwide.

Quoting it from Newsweek magazine, "She [Imelda Marcos] saw it as her duty to provide 'some kind of light, a star' for the impoversihed Filipino people over whom her husband presided. So she took $5 million shopping sprees to New york and Rome, reportedly owned the world's largest collections of gems and 3,000 pairs of shoes"

Joining the former first lady on the list are:

Greed as explained by my ever faithful buddy Wikipedia is the desire for the pursuit of money, wealth, power, food, or other possessions, especially when this denies the same goods to others. It is generally considered a vice, and is one of the seven deadly sins in Catholicism. Greed is a form of idolatry, according to the Bible (Colossians 3:5). The most common explanation is that the greedy person values money or possessions more than God. This may also be connected with worship of the golden calf. Another understanding is that greed serves to bring as many things that the greedy person considers valuables to that person, making him the center of his efforts, the one he aims to please, converting him into his own god, and creating pride with great concentration on the ego.

I think each of us should realize that life is not about money at all. It is true that it really does provide a good start but there's gotta be more to life than money. I certainly believe that the love of money is the root of all evil. If love of money surpasses the love of God, that’s when men act as if they are not children of God. We all have to be responsible sons of the Creator by doing what the scriptures teach and say.

Imelda Marcos and her ever famous collection of shoes. 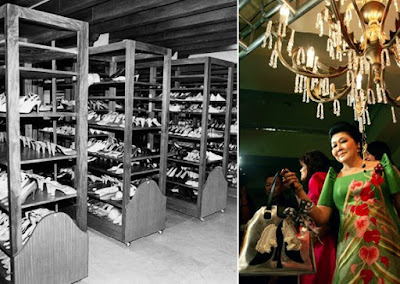 Imelda, undeniably beautiful during her time.