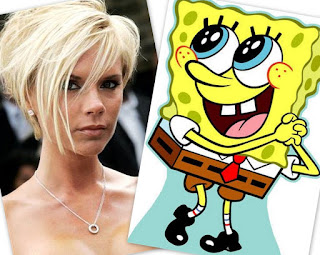 Victoria Beckham will be jamming underwater with Spongebob and friends! Nah, it's not what you're thinking. She will not dive in the sea and swim with the fish. The former Spice Girls member will have a special cameo in the cartoon series Spongebob Squarepants which will be aired sometime next year. According to her, she was inspired to do this role by her 4-year old son Cruz, who is a die-hard Spongebob fanatic.
Posh Spice will voice a British princess role by the character of Queen Amphitrite on the said upcoming 2010 episode written especially for her. Sources say that Victoria enjoyed playing the voice role and is so excited to do more. At one interview, she even joked that she could just simply rock up to the studios in a trackie and no make-up and no one would ever know.
Why not? Spongebob is very popular and can get along with the Hollywood shine. This cartoon star deserves to have with him "starry starry" voices under the sea.
Now, Victoria's starting to get the young audience's attention, too.