American Idol Season 8 is now down to two contenders. It has to be Adam Lambert or Kris Allen. Performing for the pre-finale, both have received praises and honors from the judges. Adam's first on stage sang Mad World. All judges liked the performance except that Simon commented as a little bit over theatrical and it reminded him of Phantom of the Opera. Kris did Ain't no Sunshine and according to Randy, it was one of his best performances ever. Kris took over on round one according to Simon.
For the second song, A Change is Gonna Come for Adam and What's Goin' On for Kris. Simon grants round two to Adam. Paula said it's the best she has ever heard Adam sing and thinks he will be an iconic star.
And for the third and last song, both sang No Boundaries. Simon told Adam that he has been the best contestant this season has ever had and the idea of doing this show is it can find a worldwide star. And from Simon, too, watching Kris perform on the stage tonight has been incredible.
Tomorrow will be the much awaited big finale for American Idol season 8. America will have to choose between Adam and Kris. It's between the acoustic rocker from Conway and the glam rocker from California.
Adam Lambert and Kris Allen 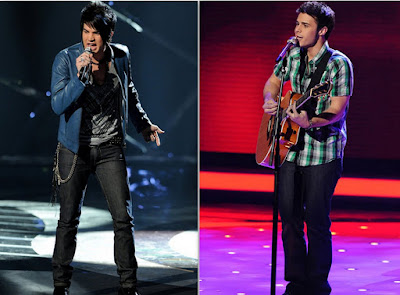