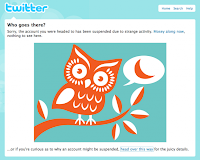 After almost two weeks of adjournment, at last, my Twitter account has been lifted from suspension. According to the email that was sent to me by a Twitter administrator, I was suspended because of a stange activity that involved my account. To my surprise, I quickly replied to the email and asked for further information regarding my castigation. Though I already have a little clue then on what was that "strange activity" they were accusing me. Because a few days back, I was not able to update my blog and other accounts and as soon as I went online, I posted bulk status updates on Twitter containing my recent blog posts with their URL.

After a day when I sent them email, another from the team replied to me and explained that I got involved in a follow churn which is a violation of the Twitter rules. This, as explained by the representative, is a constant following and then unfollowing others. And accounts that engage in follow churn are suspended for a minimum of one week. That's quite strange because as far as I know, I never did such act. Anyway, good thing it was only a temporary suspension and now, I am back to business again. A little more careful, a little more aware and a whole lot of tweets.