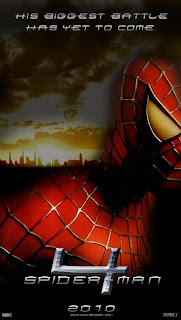 Spidey fans like me sure are excited on the 4th installment of the Spiderman movie series. To hit the big screen tentatively on May 6th 2011, a lot of twists will be expected in the movie which will make it unique from the comic series. Many fans are still left puzzled on who's going to be Parker's antagonist as director Sam Raimi stated that they are still in the process of deciding who the villain's going to be. He even confidently said that people will surely appreciate their choice and will definitely be a big part of New York.

Some thinks The Lizard would be the villain as it has been mentioned in the past movies as Parker's teacher in the human identity of Dr. Curt Connors. One choice could also be the vampire character of Morbius and is rumored to be Raimi's top choice. As to whether who the villain is or how it will differ from the marvel comics, I hope it would be better than the 3rd. Columbia pictures said that there may be one villain but the maximum will be two as the Spiderman 3 seemed inappropriate and weak having many villains.

Who do you think will it be after Green Goblin, Doctor Octopus and Sand Man?