After the success of RocKampangan, the first ever Kapampangan rock album in history plus many other Kapampangan themed productions, Jason Paul Laxamana will be having an art nude exhibit in key places in Pampanga and Manila. Titled "Amanu: The Human Body in Major Philippine Languages", the event will be held this August in line with the celebration of the Buwan ng mga Wika (Languages Month).
Some of the other projects where Mr. Laxamana was made known for are Balangingi (Nosebleed, won Best Short Film Award at the 1st Philippine Digital Awards last March 2009), Kalam (First ever Kapampanganovela) and many other interesting film ventures.
Preview exhibit will be on August 20 at UP Diliman. Here are a few teaser photos that will be displayed in the exhibit: 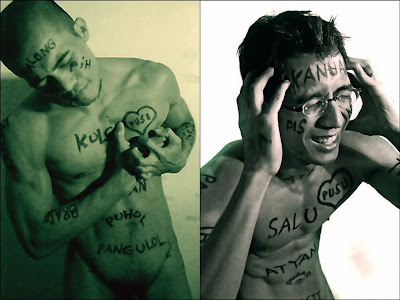