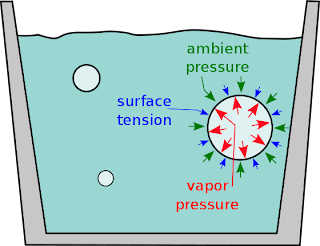 I have read a very shocking story about microwaving water. A man who decided to have a coffee puts in the microwave a cup of water to heat. And soon after the timer shuts off, he noticed that the water isn't boiling at all. So he decided to bring it out to see and to his surprise, the cup of water exploded right into his face leaving him with major burns and blisters and almost lost his vision.

I quickly googled this topic and searched for facts and explanation about it. Microwaved liquids don't usually bubble even if it reach boiling point. It is a term in science called superheating. Superheated liquids react only when it is moved or disturbed. As in this case, the cup was moved thus causing the water to shake. What happens here is water heats faster even before the bubbles build up. The liquid continues to rise in temperature and it does not release the heat as it is trapped inside. And when it is bumped or moved, the excited bubbles quickly escape thus creating a dangerous outburst.

This strongly happens to pure water and as explained by the FDA, the risk will be greatly reduced when impurities like coffee or sugar is added. Pure water needs a nucleation space like a textured surface or rough material for bubbles to develop quickly and help vapor to escape out.