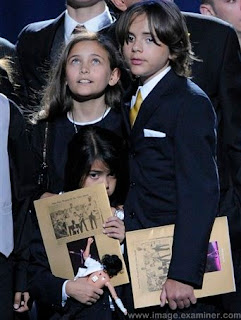 Yesterday was Michael Jackson's final wake at the Staples Center. It was attended by big Hollywood names and VIPs. There were a lot of very emotional performances from Mariah Carey, Stevie Wonder, Jennifer Hudson and Lionel Richie just to name some.
Brooke Shields and NBA legend Earvin "Magic" Johnson though teary-eyed and their voice sounded shaky, also talked about their memorable experiences with the King of Pop.
But the most emotional part of MJ's wake was when her 11-year old daughter, Paris speaks her pain out and drenched in tears in front of the crowd. I have included the video for you to see how devastated she was while saying that her father has been the best daddy you could ever imagine and how she loves him so much.