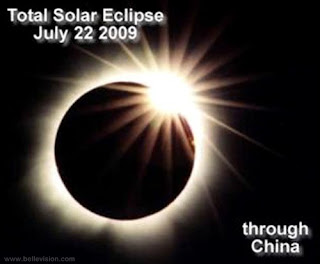 People in most parts of Asia especially in India and China have witnessed today the longest full solar eclipse of the 21st century which lasted 6 minutes and 39 seconds. This record of the longest duration as many claim will not be surpassed until the June 13, 2132 solar eclipse.
I was a bit worried though about this solar eclipse because a lot of speculations from critiques and experts have sprouted out. Some say that this signals a tsunami that might approach the coast of Japan because of the tidal pull that might move off the tectonic plates. Others say that this might change the global metamorphosis as this can affect the earth's behavior.
Actually, I wasn't able to witness the eclipse since I just woke up. That's a big regret for me as it will only happen again after 12 decades. Here in the Philippines, just a partial eclipse was seen since the totality was witnessed in major cities of India, China, and nearby which on the lighter side, these cities have exponentially boomed in tourism because scientists and students found these places to be ideal spots to view the totality. To those like me who never had the chance to see face to face the eclipse, a lot of videos are available online that will wipe away your disappointment.