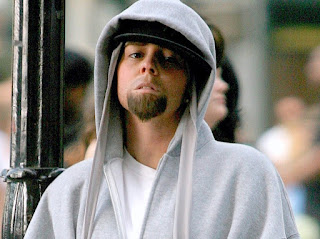 Mariah Carey, on her newest music video mocks the King of Rap, Eminem. Wearing the signature baggy outfit and a hood of the famous rapper, both Mariah and Eminem fans I'm sure will be shocked and surprised on this new video. Kudos to MC for the effort of doing it though she really did not achieve the manly look.
The music video for this latest song entitled "Obsessed" directed by Brett Ratner was taken and filmed at New York city and will premiere on America's Got Talent on July 15.