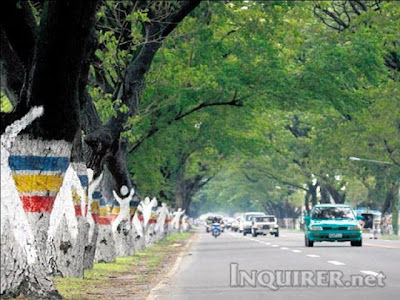 I was in San Fernando city, Pampanga just this morning to attend some important meeting with the NTC administrator. While I was on my way, I noticed the trees alongside the McArthur highway painted with white human figures as if they were hugging the trees. Then I was informed about the road expansion project of the local government and more than 4,000 trees are sentenced to be cut down from Pampanga to Tarlac. I can’t believe that such proposal was approved by the Department of Environment and Natural Resources (DENR).

For the reason that is, Kapampangan artists and environmentalists are trying to turn down this road-widening plan by calling out officials not to cut the trees who have rendered long term service since the Mount Pinatubo eruption. Thus, they have painted human figures to almost 1,000 of them and now they are calling for volunteers and concerned citizens for donations so that they can continue to mark art to all convicted trees as they have run out of paint.

I have already seen a lot of big trees chopped and knocked down on some parts of the city and I was really disappointed. Trees are very important since they serve as shades to the scorching heat of the sun. I am actually worried that our province might soon become like Manila where the ambient air is by and large polluted and that soon, smokes from vehicles will just become a normal content of the air we breathe. I hope DENR will do something about this. I totally want to rebuff this plan. This deal once made can never be undone so I hope this would be given attention before it's too late.