I felt really fortunate and blessed, at the same time sad and bothered when I learned from a local news that a huge tornado hit Bulacan particularly the cities of Balagtas and Guiguinto at around 2 in the afternoon today. It was reported that a lot of houses were affected with more than a million peso in casualty. As what I have seen in the news, the tornado really was powerful as it was able to knock down a lot of establishments and electric posts.
It gave me chills as I watch the news because Bulacan is just a neighbor province of Pampanga which is where I live. According to experts, we may experience a number of these tornadoes in our country because of the frequent change in temperature making the cumulo-nimbus clouds (a.k.a. thunderstorm clouds) to develop fast thus creating a funnel-like wind formation.
It is quite disturbing that such powerful tornadoes develop in our country and it's starting to give me that insane worry. Let's just pray for our safety. 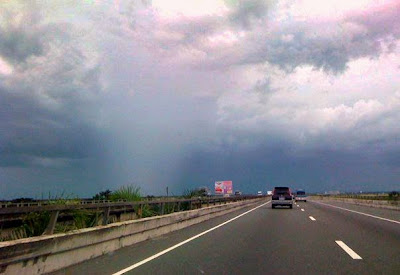