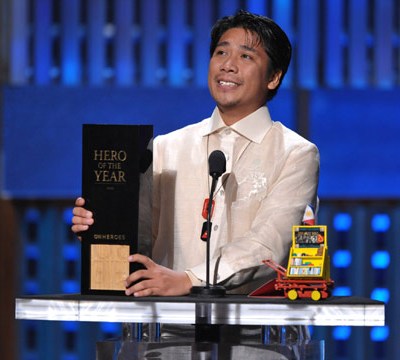 Filipino teacher, Efren Peñaflorida Jr., who pioneered the "pushcart classroom", is awarded CNN's 2009 Hero of the Year. Peñaflorida's noble dedication in literally bringing the schools to the unfortunate has brought him to this prestigious title. He and his team's mobile education campaign were able to teach a lot of poor kids how to read and write especially those living in the streets and in the slums who cannot afford formal schooling.

The official proclamation was held during the conclusion of the third annual "CNN Heroes: An All-Star Tribute" last Saturday night at the Kodak Theatre in Hollywood. The event will premiere on TV on the 26th of November on CNN's global network.

Peñaflorida also received a $100,000 cash prize which will definitely be of great help in funding and improving his roving pushcart classroom advocacy.