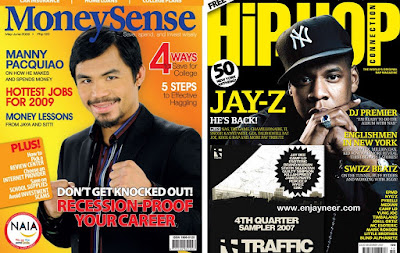 I was at home watching the local news awhile ago and I was not surprised to see that almost every channel talks about Manny Pacquiao's victory over Miguel Cotto. The Manny fever is everywhere - the Internet, TV, newspapers and in the slums.

A lot of Hollywood celebrities were also present during the fight at the MGM Grand in Las Vegas all cheering for their personal bet of boxer. And here's the latest buzz: news has it that international singer/rapper Jay-Z will soon be doing his latest music video and considering Manny as one of the sources of his inspiration, he is requesting for the special appearance of the boxing champ on the music video. Now that's cool!! Manny is invading the world!