Dungeons and Dragons is a one the most played fantasy online role-playing games that first became popular as a board game that was published around the 70s. The game appears to be more of like a miniature war game that follows a ruling system in order to go on to the next level.

Due to the popularity of this combat adventure, Jones Soda finally released its Spellcasting beverage that allows you to feel the enchantment as if you really are in the world of Dungeons and Dragons. Dungeons and Dragons Soda is available in many different magical flavors that come in great-tasting fruity variants with these six out of the ordinary DnD-inspired names: Potion of Healing, Sneak Attack, Bigby's Crushing Thirst Destroyer, Dwarven Draught, Eldritch Blast and Illithid Brain Juice. 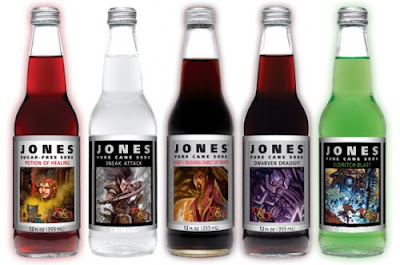 The influence of DnD has drawn a lot of huge crowds in the gaming and entertainment industry from the time it was released. And now, DnD is also taking over the beverage market with the growing popularity of Dungeons and Dragons Jones Soda. To those who are interested to make an order, the sodas come in cases of six and twelve. Hop into their website and get that DnD magic within you.